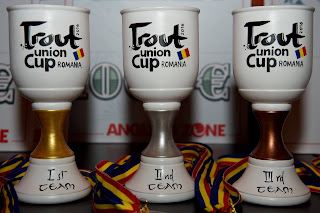 ﻿The task and the whole idea of TUCAS Sport Fishing Association and it project Trout Union Cup is promoting discipline Carnivorous Artificial Bait Shore Angling, Catch & Release and Fair Play competition rounded FIPSed rules. In addition to primary tasks we gave him a character and opportunities to all us make better by giving 10 competitor registrations by nation. It is excellent idea how to make teams and competition even better. Our recognition is involving the new members, last year that was Serbia and now Hungary also applied so on Trout Union Cup in Romania we had totally 23 teams (91 competitor) from 13 countries - Romania, Moldova, Bulgaria, Croatia, Bosnia and Herzegovina, Hungary, Serbia, Latvia, Ukraina, Belarus, Russia, Czech Republic and Slovakia.

Trout Union Cup Romania - the fifth jubilee!
Every organizer when making something have only one wish. That wish is to make a project a better then previous one. Since first Trout Union from 2013. the most important to us is creating excellent conditions for tournament itself. After decision about Tarnava Mare river as perfect ''controlled river'' with great natural predispositions our ''field organizer'' needed to be chosen. For this competition that person was captain of Romanian Spin and Boat team's Lucian Constantin. His role was very important in executing our thoughts and plans into actions. It is a project of long preparation and much was needed to be done, but Lucian was came into it with strong wishes to done it all without any possible mistake. He done it, we done and we all hope that you also like it as we are! 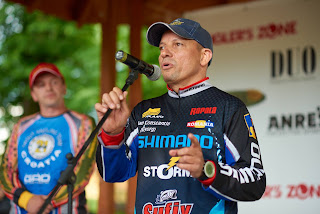 Meet the Tarnava Mare river!
Choosing river for tournaments of these proportions isn't easy to do. For locating 23-24 teams isn't possible on the most of rivers but Tarnava Mare river have all we looking for. Each of 4 sectors have excellent pattern and the same conditions for everyone. Also, it is controlled by dam with we had a agreement for water level. Depth of river is to 1,0 - 1,2 meters and it was a home to 3 species of trout's - brook trout, brown trout and rainbow trout. Other species like chub were also present but they are not our interests, of course. 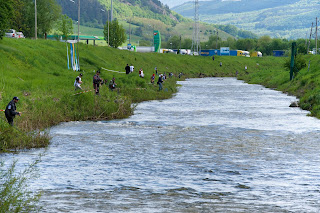 Restocking with 300 kg of rainbow trout was done for the official training. Trout's were well sized and weight was about 250 grams. Fish was in excellent healthy condition what is rare to see, especially for this one, from huge fish farm. Training started and many catches were realized. Incredible fish activity ensure us great fishing. For the 1st day we plan to restock with additional 900 kg of trout's and we do it - 19 fishes per each box. 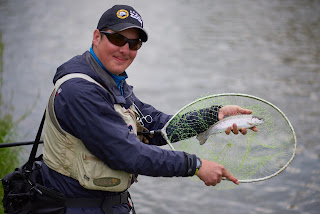 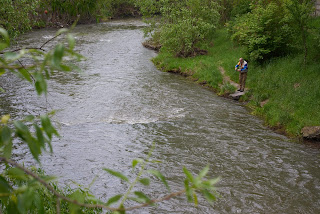 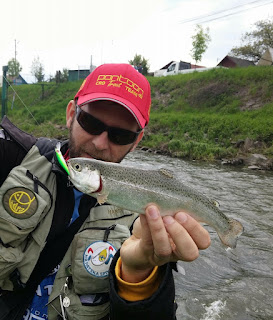 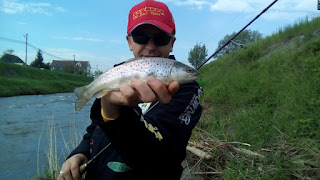 Captain's meeting was organized just after training in Zetevar Pansion just near the Tarnava Mare river. Tradicionally we presented great rewards ensured by our sponsors: Pontoon21, DUO, Anre's, St. Croix, ZipBaits, Megabass and Owner all represented by Angler's Zone company. Every team also receives special gift bags sponsored by Pontoon21- lures, spinners and snaps! It was also a meeting to make drawing for 1st day. Everything was agreed and Opening ceremony can start. We organize it in central park in Odorheiu Secuiesc. It was a ceremony where even Major of city join us and greeted us with a few words. Ceremony was complemented by a dance group Boroka with tradicional dance of Romania. 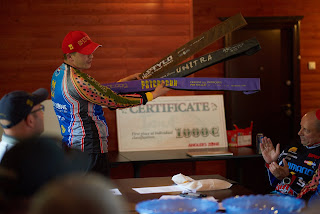 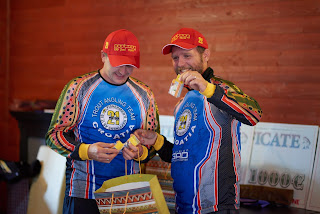 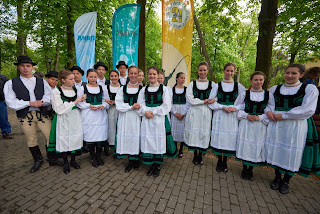 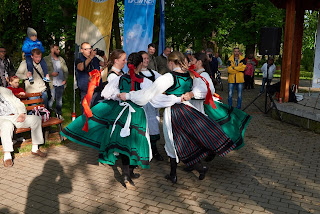 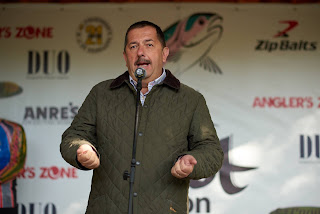 Day 1 - The D Day
Everything was ready for competition and 5 minutes till start from heavy clouds starts rain what turned in rainstorm followed by thunderstorm also. Quick decision we made and start was moved for an hour - it was a last minute run under cover. In next hour storm passed successfully  but unfortunately that was not all. A lot of heavy rain in short time turn inflow rivers in flood what muddy the Tarnava Mare river almost immediately. Turbidity of water was on high level and water level go up for approximately 15 cm. Anyway we started with 1st leg. Fish activity was not present anymore, the most of competitors was without catch. Expected fishing show was spoiled. New delay for water clearing was necessary and we decide to make it for 2 hours. Our intention was best but water didn't became clearer so we continued in that conditions, there was no other way. Till end of 4th leg still many competitors was without catch but some with a slight dose of luck were successful in trying's. The huge concentration in that conditions was needed. It was rainy all the time, cold, muddy water - patience in that conditions can be loosed quickly. It was a day with only 53 catches. Russia team knows how to take advantage in these conditions so they made catches in 3 sectors with totally 8 fishes and take 1st place. Slovakia and domestic Romania teams were just behind on the list with 5-6 fishes. 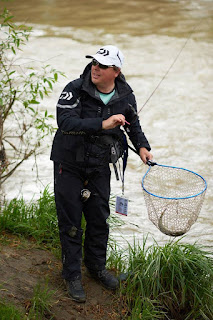 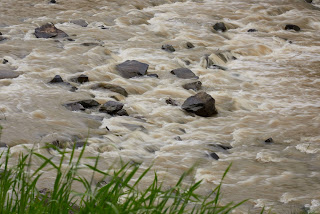 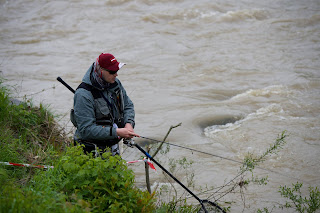 Day 2 - The Day of Trout Union Cup
All hopes in better conditions were left for second day of competition. New day bring us sun and clear water on steady water level. Excellent day - just for Trout Union Cup. Catches was realized one after the other in all sectors equally. After few rounds fish became slightly careful and it was a tricky game between it and competitor. Most surprise was fish positive reaction on wobblers on which the most catches were realized. We can believe that is  happened just because of 1st day muddy higher level of water carries many other natural garbage so reaction on soft baits was decreased. It was a day of Romania 1 team. Lot of training maded give them effort. With sector placement 1-6-6-2 they won it. Excellent Slovakia team's were just behind, Slovakia 1 was 2nd with 4-18-2,5-1 and their second team was 3rd with placement's 3-1-10-12. Again here is showed their superiority in catching trout's. 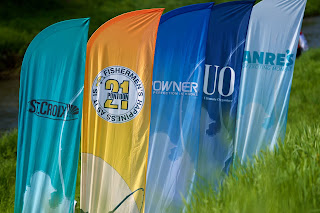 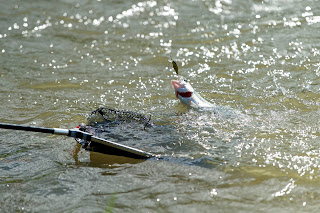 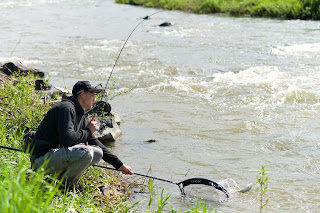 Summing results
For good placement in total summing of result's necessary was placement from 1st day or in this case catches in more sectors by team members. That bring's to teams score difference what later easily bring them to top of list. Romania team 1 with total 50,5 sum of placements and catches by day 6-103 fishes wons this competititon and became a new Winner of Trout Union Cup. Second place is reserved for Russia team who lost they lead from first day with just 3 placement's (53,5) and with 8-78 catches by days. Third place was hard keeped for Slovakia team 1 with 59 placements in total with 5-86 catches by days. These 3 teams move forward on list with a big difference in front other's, like from Bosnia and Herzegovina who took 4th place with sum of 74 plecements. 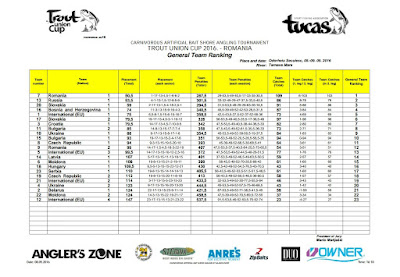 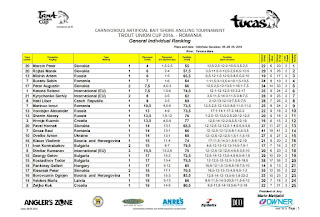 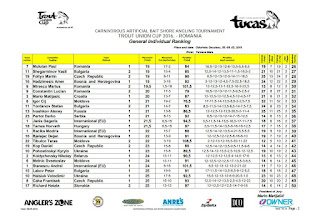 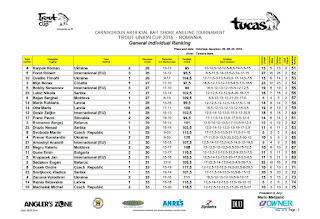 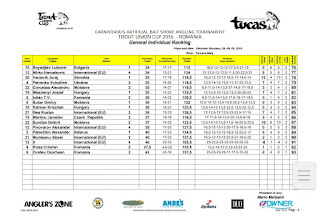 In individual classification was very strong competition for taking the top of the list. Third place was keeped for Artem Mishin from Russia team and second place is winned by Marek Rojtaš from Slovakia team. Both of them have sum of placements 6 but Marek Rojtaš is in slight advance with 57,5 to 65,5 penalties. The first place and Winner of Trout Union Cup 2016. is Peter Marcin from Slovakia. His sum of placements is 4 (1,5-2,5) which is excellent, it was more than enought for win.
INDIVIDUAL CLASSIFICATION:
1st place - PETER MARCIN
2nd place - MAREK ROJTAŠ
3rd place - ARTEM MISHIN 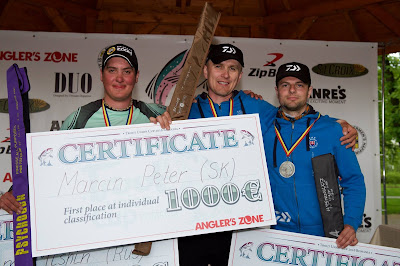 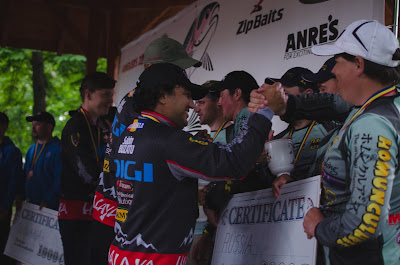 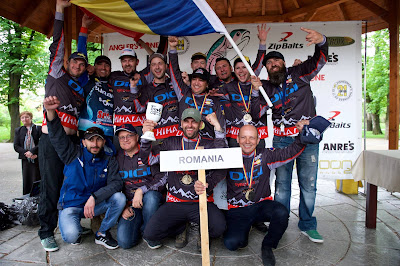 Romania Team knows how to take advantage on their field. From their captain we know that they train very often and there have they own league. So we congratulate them on win as they followers Russia and Slovakia Team. Individually, Peter Marcin take his triumph and this is not a first time. This maestro from before is well-known as excellent fisherman who already won rewards on Trout Union Cup. Congratulations to him and his win like his score followers, his team mate Marek Rojtaš and Artem Mishin from Russia Team. 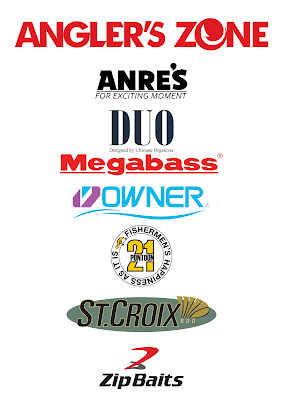 On behalf of Sport Fishing Association TUCAS, in front of our sponsors and whole organization team we thank you all for being a part of TROUT UNION CUP 2016. Romania. Behind us is a great tournament of  rivarly and competition. We are sure that you didn't miss excitement and competition spirit. We hope that you all bring home good memories, that you enjoyed and that you will join on next Trout Union Cup.